The oral arguments at the U.S. Supreme Court this week have shown that existing national protections for abortion and other reproductive rights may not long survive. This makes it essential that the New Jersey legislature act during the current brief session to pass the Reproductive Freedom Act that not only codifies these rights into state law but also makes abortion fully accessible to all New Jerseyans. Governor Murphy needs this bill on his desk to act.

We are asking you to contact the Legislature Leadership and show your support for passing the RFA.

BlueWaveNJ’s board unanimously endorsed Governor Phil Murphy for reelection based on his extensive track record of progressive accomplishments as well as his leadership and compassion during this unprecedented crisis.

Under Governor Murphy, New Jersey has made strides in expanding economic opportunities for working families, lowering the costs of health care, tackling longstanding racial inequities, and creating a stronger, fairer economy that works for every family.

The Fight for Justice: Senators Must Confirm Kristen Clarke

If there was ever a time when the U.S. Department of Justice must be in the best of hands, it’s now. And President Biden has nominated Kristen Clarke - just the type of leader that’s needed - to be Assistant Attorney General for Civil Rights.

Free Tickets to Upcoming Events by Becoming a Member Today

Become a BlueWaveNJ member today and receive free tickets to our upcoming virtual events including our Discussions with NJ Congressional Leaders.

Our first Congressional discussion is on April 15th with Congresswoman Mikie Sherrill and Professor Kathleen Gerson Women, Work and the Pandemic, and we are busy planning our next not-to-be-missed event with Congressman Andy Kim, date and time to be announced shortly. By becoming a member, you will receive free tickets to all our digital 2021 events. 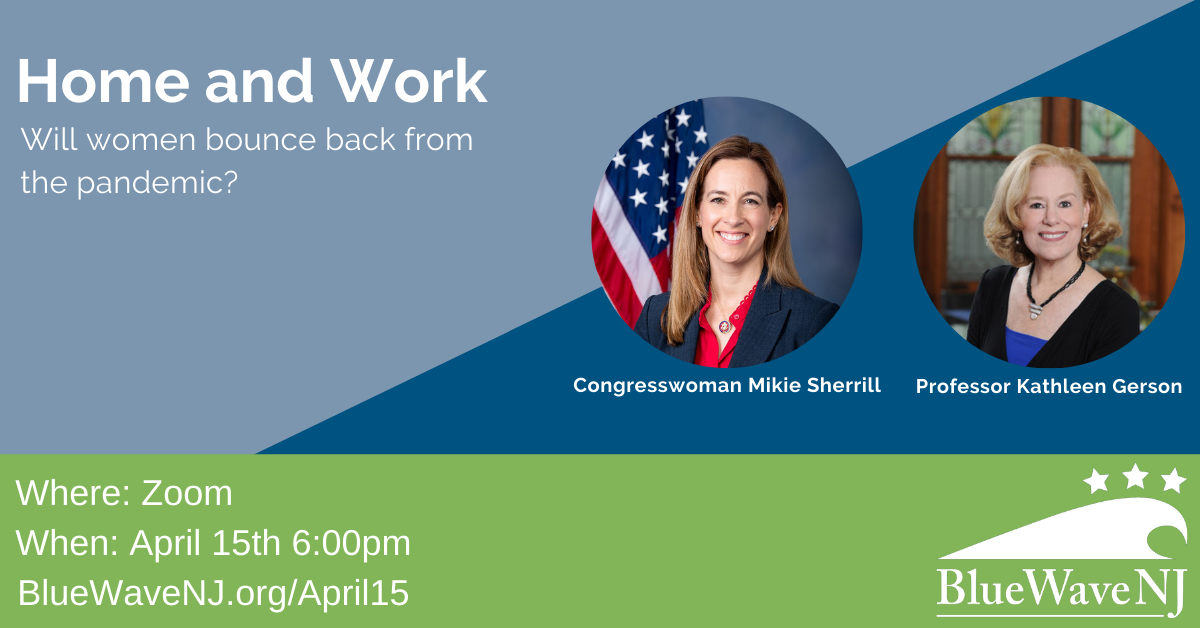 With the support of our members, BlueWaveNJ made a huge difference in the 2020 election campaign and had a significant impact on important legislation. We have an ambitious agenda for 2021 and we need your help. You can learn more about what we've accomplished and what we are doing this year at www.BlueWaveNJ.org/about.

THANK YOU FOR YOUR CONTINUED SUPPORT

Reproductive Rights Are on the Line and We Need Your Help

With the new conservative majority on our Supreme Court, Roe v. Wade is in jeopardy.

Here in New Jersey we are working to pass The Reproductive Freedom Act. The RFA is ground-breaking legislation that will codify the right to abortion for everyone in New Jersey. It also expands access to pregnancy-related care and birth control with a focus on historically marginalized communities.

Where Our NJ Reps Stand On Removing Trump.

It doesn't matter that Trump has just eight days left in his term, his behavior is too dangerous for us to wait it out. By impeachment, the House takes a moral stand and affirms that incitement to overthrow elected government will not be tolerated now or in the future, and those that try will be held accountable. Anything less sets an unbelievably dangerous precedent. Trump's egregious behavior should make this automatic for every representative.

If you have a NJ Democratic congressional representative, please take the time to thank them for doing their duty and holding the president accountable. Find your representative's contact info here.

We also need to express our concern (outrage) towards those that violate the rule of law.

If you are in Chris Smith's district (NJ04), we are emailing you separately to urge him to vote for impeachment. He has not yet come out in support of removing the President, but he did not participate in the treasonous attempt to vote against certifying the electoral college vote. This small gesture of patriotism gives us hope that he might be swayed to vote for Trump's removal from office.

If you live in the turncoat Jeff Van-Drew's district, please contact his office and demand his immediate resignation. He has completely sold out the people of New Jersey by supporting and disseminating Trump's lies. After his disgraceful party switch, he has become one of Trump's most militant supporters. Not only did he vote to object to the legally certified electoral college results, he amplified dangerous assertions he knew were untrue in a speech on the House floor. This behavior should not be forgiven. If you live in his district, call for his resignation.

This has been a stressful time for all of us. In just eight days Democrats will take control of the entire government. Let's ask our representatives to make sure that Trump will not remain in a position to further disrupt and hinder this constitutionally-mandated transfer of power.

Everyone at BlueWaveNJ hopes you and your families are staying safe and sane.

Donald Trump Must Be Removed from Office

Yesterday, Donald Trump incited a violent insurrection by a mob of his supporters, intended to overturn our democracy. Until yesterday, Trump’s actions were aptly termed a bloodless coup. Now we need to remove the word bloodless.

We must hold the president accountable. These events once again demonstrate Trump's unfitness to remain in office even for the 13 days left in his term OR in the future. His behavior is too egregious and dangerous.  Given yesterday's attempted coup and the continuing threat to the peaceful transfer of power, we cannot just wait for Trump to leave office. This is about maintaining the rule of law over the next two weeks and signaling that mob violence to overthrow elected officials and overturn elections will not be tolerated now or in the future and those that try it will be held accountable.

If the cabinet does not invoke the 25th amendment to remove him, BlueWaveNJ joins Indivisible's call for the House and Senate to impeach and convict him. Impeachment will force Republicans to choose whether they will continue to support a would-be dictator or uphold the peaceful transfer of power. It will also prevent him from ever holding elected federal office again.

Please call our NJ Congressional delegation and demand that the president is held accountable.  We also call for an investigation into the failure of law enforcement to prepare for the violence we all feared would materialize yesterday from the president's incitement. The difference between the police presence and even accommodation of the protestors yesterday compared to their overwhelming and violent response to the peaceful protests at the capital of the killing of George Floyd is chilling.

Happy New Year and to a Brighter 2021

We know you have heard every negative adjective to describe 2020 and we are not going to add others. But in our hurry to kick 2020 and Trump's presidency goodbye, we should not forget the remarkable things BlueWaveNJ accomplished in the time of the pandemic. We phoned and we mailed until we dropped. The numbers are incredible:

...and, of course, the Biden/Harris ticket won their decisive victory and all New Jersey's Democratic congress members won their elections.

Thank you for everything you did to achieve these victories; we can all feel proud.

We are genuinely hopeful we can make significant progress in the New Year, both in New Jersey and Washington. We will be working every day for our democracy and planet, for affordable health care for all, reproductive rights, and an equitable economic recovery, to name only a few of next year's priorities.

Please consider making a donation to support our efforts at: https://www.bluewavenj.org/support, and please join us in 2021 to fight for a more progressive America.

Wishing you all a happy and safe New Year