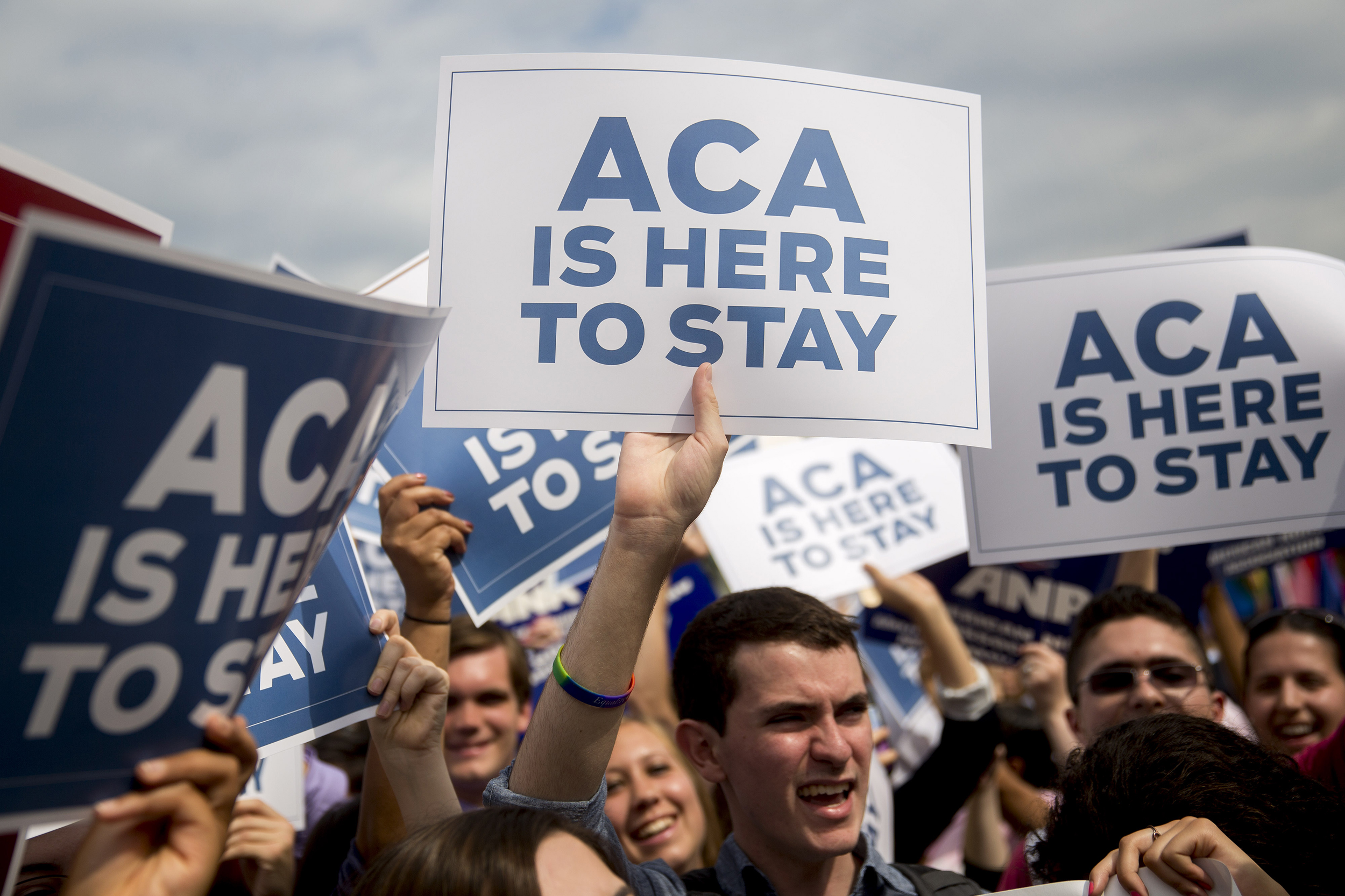 Republicans are far from done trying to hack pieces of the ACA by litigation. One dangerous suit, Kelley v. Becerra, claims that the ACA requirement that health plans provide at no cost to patients an array of preventive services, including vaccinations, birth control, and various screenings, such as for various forms of cancer, diabetes, depression, and children's vision, is unconstitutional. (A subset of free services directed specifically at women is a particular conservative target.)  Rendering free provision of those services voluntary would harm tens of millions of Americans.

The conservative justices on the Supreme Court have declared their support for the right-wing legal theory behind the suit, which is that Congress should be strictly limited in the extent to which it “delegates” the fleshing out of laws to federal agencies, which in a modern state give laws substance via formal rulemaking. We will never be done with Republican efforts to undermine effective government action, especially in healthcare.

Enacted this spring: The Much More Affordable Care Act

It seems safe to say, however, that barring a complete Republican takeover of all branches of government, the ACA's core programs have survived their last mortal challenge. Meanwhile, in case you missed it, the American Rescue Plan (ARP) signed into law by President Biden in March took one giant step toward making the ACA work as originally conceived -- providing near-universal access (with some painful remaining exceptions*) to affordable care to all.

The ARP massively increased premium subsidies in the ACA marketplace at all income levels. For enrollees with incomes up to 150% of the Federal Poverty Level ($19,140 for an individual, $32,580 for a family of four), a benchmark silver plan is now free. At that income level, Cost Sharing Reduction reduces a silver plan’s out-of-pocket costs to a level lower than in most employer plans. The median deductible for silver plans at this income level is $0; the average is under $200.

At the other end of the pay scale, the ARP removed the ACA's infamous "subsidy cliff" -- the cutoff of eligibility for subsidies at 400% FPL ($51,040 for an individual, $104,800 for a family of four). Now, no one who lacks access to other affordable insurance (e.g., from an employer) will pay more than 8.5% of income for a benchmark silver plan. Here in New Jersey, a family of four with an income of $150,000 that might have been paying $2,000 a month for a bronze plan will now pay about $800 per month for a silver plan --as New Jersey kicks in an extra $200/month in supplemental state subsidy.

At incomes in between, the ARP sharply cut the percentage of income required for a benchmark silver plan. See this article for illustrations of the change at various income levels. The American Rescue Plan also effectively made free high-CSR silver plans free to anyone who received any unemployment insurance compensation in 2021 and lacked access to other affordable insurance.

The ARP subsidy boosts are temporary, extending only through 2022. But if Democrats achieve nothing else on the healthcare front -- if a public option or expansion of Medicare eligibility prove bridges too far -- they are all but politically compelled to make the new subsidy schedule permanent. It was obvious from the start -- from before the start -- that ACA subsidies were inadequate to the promise of "affordable" care for all. Redressing that fundamental flaw is the path of least resistance for Democrats seeking to deliver tangible health benefits.

The enhanced ACA is working

Proof of concept is also fast emerging. The market is responding strongly to the new subsidies.

Although ACA marketplace enrollment is typically available to most people only during an Open Enrollment season in the fall, early this year the Biden administration prepped the ground for the ARP subsidy boost. Beginning on February 15, the administration opened an emergency special enrollment period (SEP), extending until August 15 in the 36 states that use the federal ACA exchange, HealthCare.gov.

The 15 state-run exchanges (including D.C.'s) followed suit, though the terms and length of the state SEPs vary somewhat.  The SEP offered by HealthCare.gov and in most states is akin to the annual Open Enrollment period: anyone who lacks insurance can enroll. Normally, a person seeking coverage outside of open enrollment has to apply for a personal SEP and document a qualifying “life change,” such as loss of employer-sponsored insurance.

After the ARP’s passage, HealthCare.gov further opened the SEP to enable current enrollees to switch plans – for example, to upgrade from Bronze to Silver in light of the enriched subsidies. The Center for Medicare and Medicaid Services (CMS) also earmarked $50 million to advertise the SEP.

The upgraded subsidies, retroactive to January 1, went live on HealthCare.gov on April 1, and on state-based marketplaces in subsequent weeks. All in all, doors to coverage for the uninsured were flung significantly wider this spring – and remain open.

The emergency SEP and upgraded subsidies are having an impact.  HHS recently announced that through May 31, new plan selections in 36 HealthCare.gov states exceed 1.2 million – more than triple enrollment in the same period in 2019, the last “normal” year (in normal years, individuals who undergo a qualifying "life change" such as job loss can apply for a personal SEP outside of Open Enrollment). A large percentage of new enrollees were apparently low-income and accessing free or near-free silver plans with strong CSR, as the median deductible for new enrollees was just $75.

Including the 15 state-based marketplaces raises the SEP enrollment total this spring to 1.65 million, according to marketplace analyst Charles Gaba’s estimate. Mid-year marketplace enrollment is about 20% above the pre-pandemic high point. Also during the SEP, 2.3 million existing enrollees returned to the marketplace and reduced their premiums.

A bulwark during the pandemic

Even before the Biden administration took office, the ACA -- having barely survived the Republican repeal drive in 2017 -- was doing yeoman's work to prevent a massive increase in the ranks of the uninsured in the wake of tens of millions of job losses triggered by the pandemic.

The ACA's capacity to catch the newly uninsured was enhanced by Democratic shaping of the Families First Act, the first major pandemic relief bill, passed in March 2020. A provision in that bill increased the federal contribution to states' Medicaid costs -- on condition that states pause Medicaid disenrollments for the duration of the emergency. In the years previous, the Trump administration had encouraged states to perform frequent income checks on Medicaid enrollees -- and disenrollments of those who either crossed the eligibility threshold or failed to respond to demands for information. Medicaid enrollment shrank by 5% from March 2017 to the eve of the pandemic.

With disenrollments on pause since last March, Medicaid enrollment has swelled -- it rose 13% from February 2020 to January 2021, topping 80 million (and by now surely exceeds 81 million).  A quarter of the country is now on Medicaid.  Enrollment by those specifically rendered eligible for Medicaid by ACA expansion criteria has increased by well over 20% and is now close to 20 million.

The upshot is that notwithstanding tens of millions of job losses triggered by the pandemic, the uninsured rate in the U.S. is probably at an all-time low. Losses of insurance through job loss appear to have been relatively low, both because many of the lost jobs were of types that did not provide health insurance and because many employers maintained health coverage during layoffs. Medicaid enrollment is up by 10 million, and marketplace enrollment by close to 2 million.

While Democrats are probably about 25 senators short of any consideration of Medicare for All, a lot of ambitious plans are afloat: reducing the Medicare eligibility age, introducing a public option into the ACA marketplace, giving Medicare authority to negotiate prescription drug prices for all payers (as in H.R. 3, the bill passed by the House last year).  A strong public option, paying Medicare rates to providers, would reduce costs to the federal government, since the subsidized marketplace plans pay commercial rates, about twice those paid by Medicare. Strong prescription drug cost control legislation would likewise sharply reduce costs, making more generous subsidies more affordable.

Democrats probably lack the votes and the will to pass these measures, all of which are furiously opposed by powerful healthcare lobbies -- though they may pass some weaker form of prescription drug cost control.  But unless they fall victim to total legislative paralysis, they will probably make the ARP subsidy boosts permanent. And that would be, to cite President Biden's chief contribution to the English language, a BFD.

* The major remaining coverage gaps are as follows:

Andrew Sprung, co-chair of BlueWaveNJ's healthcare committee, writes about healthcare policy on his blog, xpostfactoid,  at healthinsurance.org, and at other publications.