BlueWaveNJ went to Washington D.C. on Jan. 29 to meet with the members of the New Jersey Congressional delegation to discuss our national agenda as well as listen to their priorities. In addition to the members of our health care, environment, economic security and election reform committees, we also had a number of young people on the bus concerned about college affordability and the staggering level of student debt they and their friends have accumulated. In each of our meetings, we gave the representative and staff a list of BlueWaveNJ’s 2019 national priorities and thanked for their support of progressive legislation. In particular, we thanked our entire house delegation for co-sponsoring the symbolic, but extremely important, For the People Act (H.R. 1) which tackles money in politics, ethics, voting rights and non-partisan redistricting, and for co-sponsoring the Bipartisan Background Check bill (H.R. 8), as well as their multiple actions to force a reopening of our federal agencies after President Trump’s unprecedented 35-day shutdown. During an extremely busy day, we met with 11 NJ members and their staff, including our two senators and 9 members of the House of Representatives.

One of the takeaways from the visit is how fortunate we are to have such a large number of thoughtful, knowledgeable and progressive Democrats. We were impressed with the quality of leadership as well as their willingness to meet and exchange ideas. Despite limited time, we were able to have a number of substantive conversations on the issues. A brief overview of each meeting is below.

If you have particular questions or would like a more in depth summary of a particular meeting, feel free to contact us at [email protected]

As Chairman of the powerful Energy and Commerce House Committee, Congressman Pallone has jurisdiction on a wide range of issues including healthcare, the environment and energy, communications and technology, consumer protection and commerce, and oversight and investigation. On healthcare, the congressman was optimistic on issues such as Drug Price reform, Surprise Billing legislation and measures to strengthen the ACA. The committee has already started a number of hearings from ensuring that Americans with pre-existing health conditions are protected to investigating Trump’s Inhumane Family Separation Policy. Regarding the environment, Congressman Pallone mentioned a few opportunities to work with Republicans and was committed to Congressional oversight of Federal Energy Regulatory Commission as well as other agencies. Given the number of young people on the trip, we asked the entire delegation about their plans for improving college affordability and job skills, as well as solutions to the student debt crisis. Congressman Pallone had one of the more detailed responses that included the need for free community college, free public college for families earning less than $150K a year, reducing interest on student debt, and increasing access to Pell Grants. 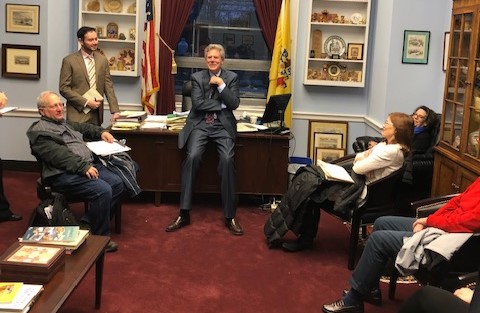 As was the case of all our new members, Congressman Kim was still settling in. He emphasized that his approach will be deliberative, transparent and solution-oriented. Whatever issue or policy that was discussed, he stressed the importance of seeing all the facts and that he approaches issues with the understanding that ‘most people can not afford a $400 emergency.’ He is a supporter of the ACA stabilization bill, believes families should have both paid sick and family leave, and, as during the campaign, continued to stress the importance of protecting coverage for those with pre-existing conditions. Given his previous work in Afghanistan, we asked about the recently reported agreement with the Taliban. The congressman was sceptical it would work without the Afghan Government being a central party to the deal.

Our conversation with Congressman Malinowski focused on infrastructure legislation since he is a member of the Infrastructure Committee. The Portal bridge reconstruction project was high on the Congressman's priorities and he emphasized the need for its completion. Congressman Malinowski revealed that there are ongoing discussions with the Coast Guard mandating that new bridges be built higher to avoid ship traffic. Congressman Malinowski went into detail how the Democratic caucus from around the country have pledged to support the Gateway Tunnel project. There will be a push for funding to be attached to a Surface Transportation Bill. On the environment, the congressman discussed his support for a climate tax and a cap and trade system which has been supported by economists on both sides of the aisle. When asked whether he supported the “Green New Deal”, he asked “which version”. He supported the concept, but felt a deadline of 10 years to achieve a completely carbon-free economy was completely unrealistic. He also reaffirmed his positions with regard to healthcare-- stressing the importance of stabilizing the ACA marketplace, making reforms to drug pricing, and continuing to pushing for protections for those with pre-existing conditions. 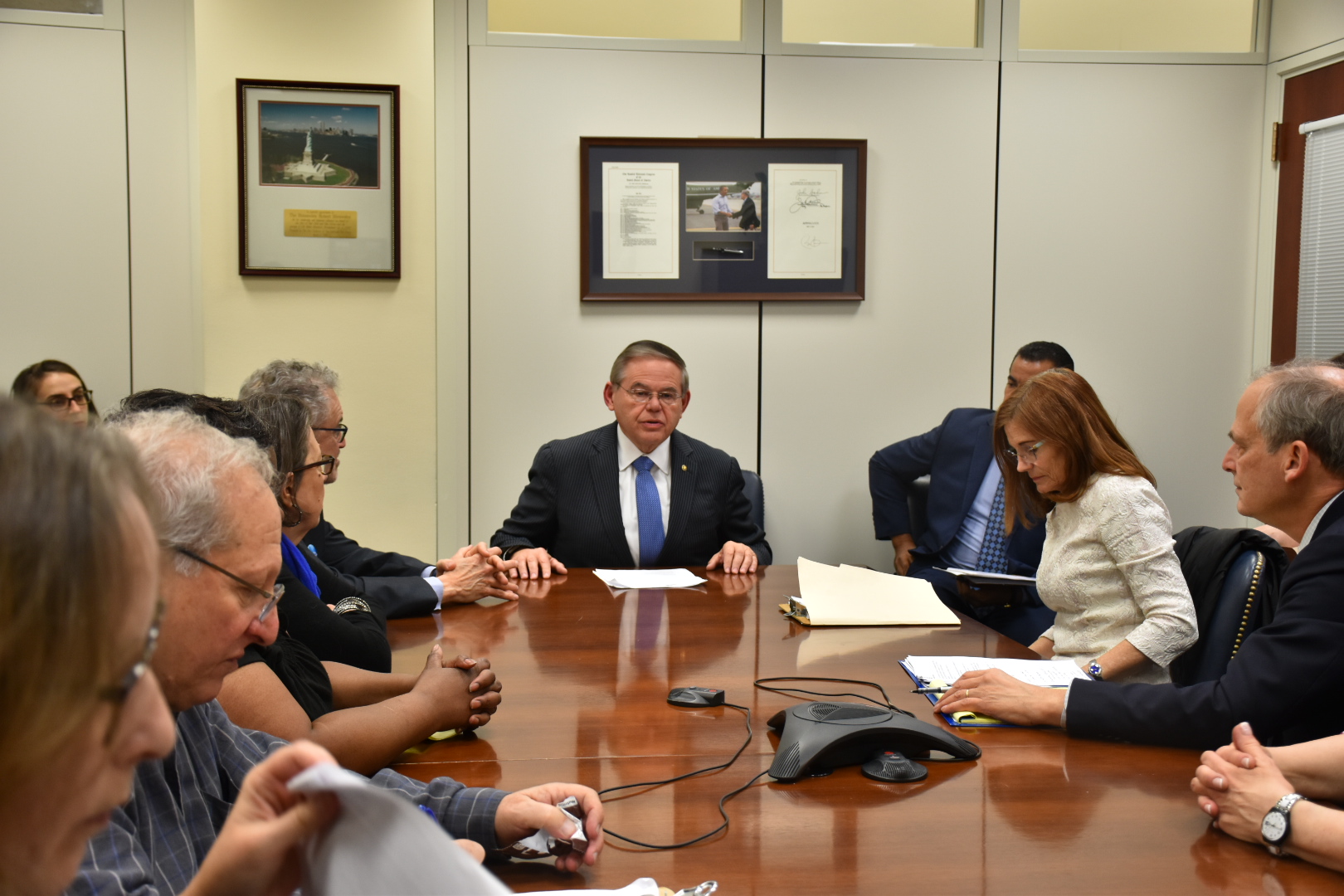 Unfortunately, Congressman Gottheimer had a press event that ran late, severely limiting our time to a few minutes. We did brief his staff on our blueprint and specific policies we will be asking the Congressman to support.. In order to make up for some of the lost time, Congressman Gottheimer walked us to our next meeting with Congressman Kim where Marcia talked about how he is well placed, as the leader of the Problem Solvers Caucus, to increase Republican support for the Gateway Project. We also asked him to support earned sick days legislation.

Congresswoman Sherrill had a vote on the floor and was running late. She did make it at the end to take pictures and greet the delegation. In our discussion with her policy director, he emphasized her support for veterans (she is on the veterans Affairs Committee) and, in particular, access to affordable child care.

We met with Congressman Payne's legislative director Erika Northington, who explained the Congressman’s initiatives and partnerships, including work on state infrastructure and his efforts to secure funding for the Gateway Tunnel Project. Recently the congressman went on a tour of NJ prisons which reinforced his support for comprehensive criminal justice reform. 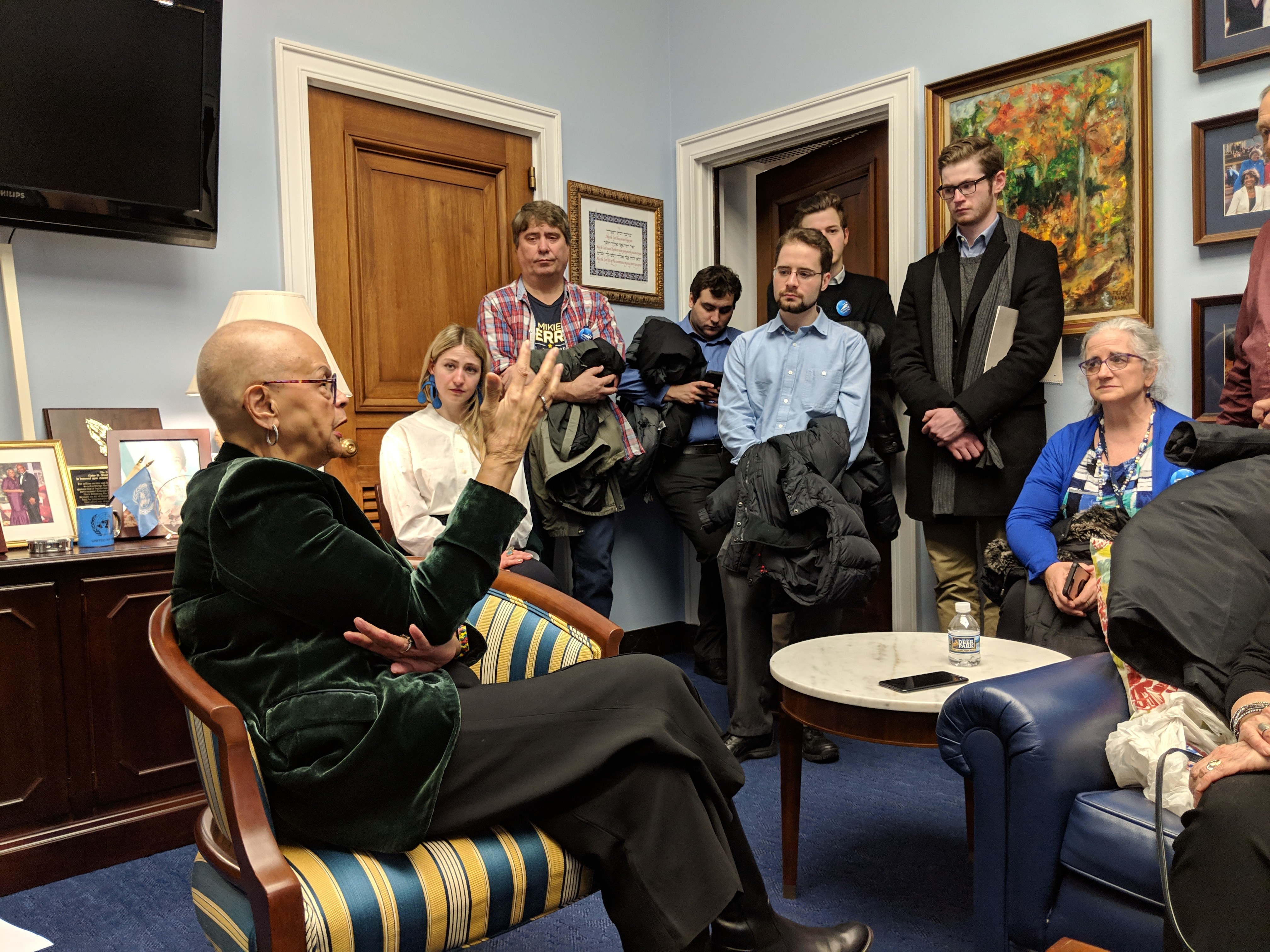 Our conversation with Congresswoman Bonnie Watson-Coleman ranged from criminal justice reform, tackling student debt, healthcare reform to economic justice. The conversation began with the need for justice. As she said, “We’ve been in a justice desert (over the last two years), there are so many things competing for attention.” The congresswoman stressed a need to both replace private prisons and go further than the “First Step Act.” On tackling student debt, she stated that current student interest rates are predatory, and that community college should be free and able to offer a larger quantity of student-required credits. With regard to drug costs, she was optimistic about bipartisan prospects for lowering drug costs while not sacrificing research and development. On economic justice issues, Congresswoman Watson-Coleman emphasised her support for increasing the federal minimum wage to $15 an hour and also BlueWaveNJ’s other economic priorities. She informed us about a town hall that is scheduled on February 20th “on how to make ends meet.” She also mentioned her support for the ERA, which we are currently 3 states short of ratification.

Our meeting with Congressman Pascrell was fruitful and informative. He spoke about a range of issues from the importance of presidential transparency when dealing with foreign countries to state rights. For example he pushed back on our request for funding for secure voting machines, stating his belief that such funding is the responsibility of the states, even though the Feds have providing such funding to the states in the past. As a senior member of the Ways and Means Committee, the Congressman is leading the legislation to get SALT deductions back. The Congressman also discussed the power imbalance between corporations and unions in our trade discussions.

Our meeting with Congressman Norcross focused on workers rights, retirement, and adapting to the changing economy. Congressman Norcross is emphasized his strong support for union rights, and his longstanding efforts to increase the minimum wage. When asked about the student debt crisis, he emphasized there were less costly alternatives to four year colleges. He told his own story and that of his family. He was an electrician and a union leader, before running for Congress. He suggested more young people should learn job skills for the twenty-first century rather than take on the debt burden of a four-year college education. The congressman pointed out that in many growing industries, firms are not getting the personnel they need. We need to match training programs with job skills. Retirement stability is also a major issue for the congressman and he explained how senior poverty is a looming problem. The congressman is part of an effort to develop a committee on multi-employer pension funds. 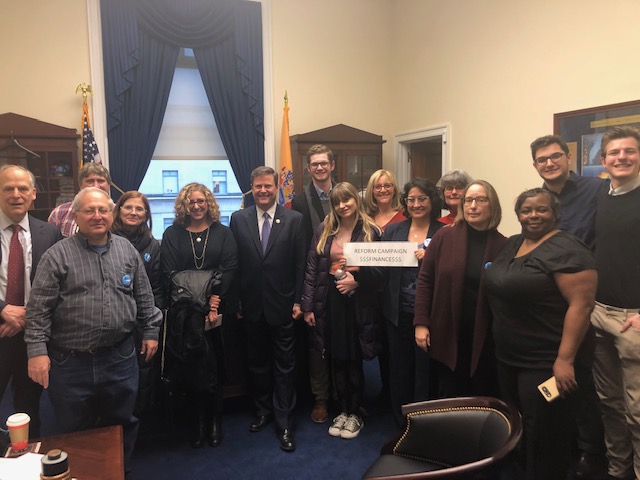 Senator Menendez is one of the foremost foreign policy experts in the senate and our meeting started out with questions on Trump’s foreign policies. The senator reminded us he was one of the minority of voices in Congress in opposing the 2003 U.S. invasion of Iraq and would like to see less commitment of US soldiers abroad, but he is opposed to the precipitous, unplanned withdrawals that Trump is doing. The senator also stressed loyalty to key allies in the Syrian conflict, namely the Kurds, and how our abandonment of them sends a terrible message to potential allies. He also believes we need to recognize the Juan Guaido government as the only legitimate Venezuelan government, but the issue must be handled by the Venezuelan people. He mentioned that he refused to sign Mitch McConnell’s resolution on Venezuela because it did not rule out U.S. military intervention there.

On healthcare issues, the senator expressed the need to enlarge the universe of who gets to buy into Medicare and, given Senator Grassley’s hearings and Republican interest, believes bipartisan support is possible with regards to controlling the costs of prescription drugs. The Senator also expressed the ‘moral imperative’ to not saddle our younger generation with debt. It is in the nation's interest to be investing in education. He mentioned that the “Warren-Menendez” bill would cut student loan debt “in half.” The Senator supports tax breaks for students and families, and supports universal community college as long as certain academic standards are achieved. Senator Menendez repeated his opposition to the 2017 Republic tax bill, which heavily favors the corporations and the most wealthy in our society. He pointed out that, due to the extreme rush of the Republicans to enact that measure, they were now anxious to enact some technical fixes. The Senator suggested that this might give Senate Democrats, with the support of the Democratic majority in the House, to put in some favorable measures, such as restoring the full deductibility of state and local income taxes (SALT), which help middle class taxpayers, especially in states like New Jersey.The Senator ended our meeting, before being called back to the senate floor, reaffirming his commitment to fight offshore drilling and support a pro-green economy.

Despite the energy and enthusiasm that always accompanies a meeting and pictures with Senator Booker, he and his staff were not optimistic about any significant legislation passing the Republican senate this year, maybe with the exception of health care if the house uses its leverage over appropriations. Our students kicked off the discussion with a question on student debt and jobs for millenials. The Senator responded that we need to overhaul higher education to train people in industries and jobs that exist. He supports the Leap Act to expand apprenticeships. The Senator also promoted his current bill to close the racial wealth gap. In discussion on possible environmental protections, the senator expressed that any plan to reduce carbon emissions needed to include next generation nuclear energy arguing that it had a lower carbon footprint than other clean energy sources. Lastly the senator emphasised his continuing efforts on criminal justice reform and was proud of his support for the ‘First Step Act,’.

View the complete album of photos from our trip to DC on the BlueWaveNJ official Facebook page.