We came by bus, train, and carpool 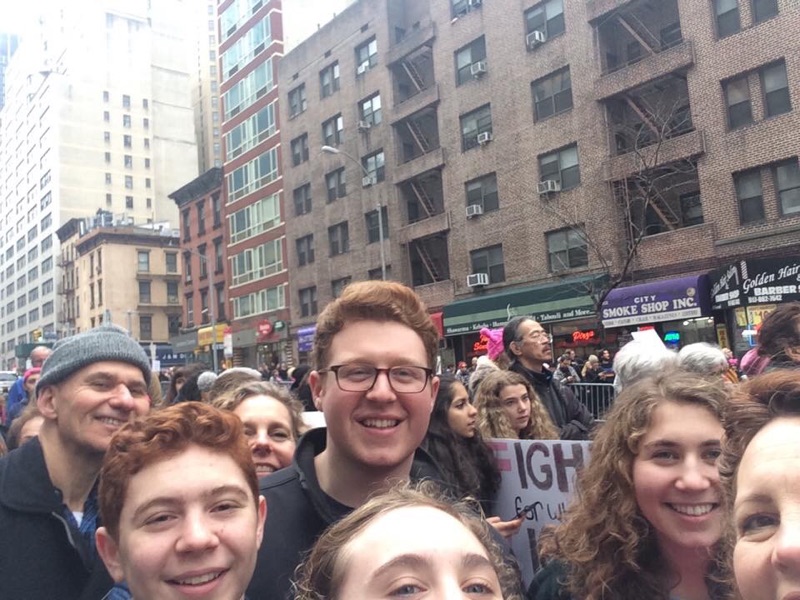 Sam Zinn (center) with family and friends in NYC

Where I marched and with whom: I marched in New York City with my mom, my little brother, my aunt and uncle and their two daughters, as well as family friends who we lost track of midway through the march.

Was this my first protest: Yes, it was.

What surprised me: I was surprised by the sheer number. It was pretty crazy and exciting and inspiring to be surrounded by hundreds of thousands of people. The collective energy and passion was so great. People are obviously frustrated [with our leadership], but it didn’t feel violent or scary. It felt unified.

Most memorable moment: When everyone was chanting “This is what democracy looks like!” you could feel this profound sense of connectedness. It was awesome....almost joyous. There was a lot of love and passion among people who didn’t know each other but were part of something that they really cared about.

What my next step is: I’m going to Amsterdam to study abroad, but I’ll be able to make calls to my Congresspeople and Washington, D.C. I’ll be a lot more open to protesting when something isn’t right.

Why I’m joining forces with BlueWaveNJ: I was impressed by how successful and effective the BWNJ organizers were at bringing so many people together to participate in the marches. I’m looking forward to seeing how I can get involved when I return this summer. 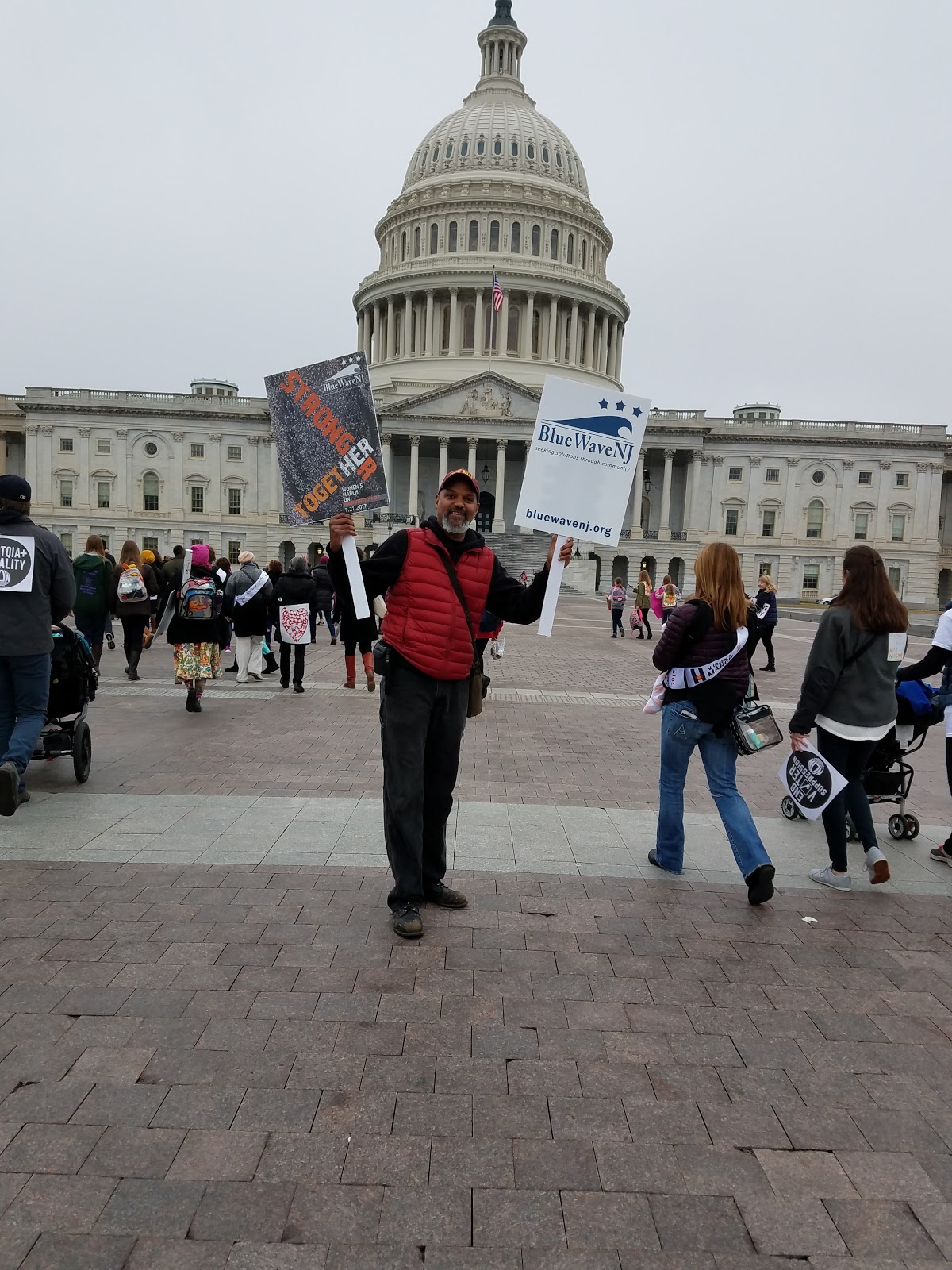 Tony Turner at the Capitol, ready to march

Where I marched and with whom: I marched in Washington DC.

Was this my first protest: I've marched and protested in Philadelphia for Mumia Abu Jamall, in New York against the wars in Afghanistan and Iraq, as well as to stand up against police brutality when unarmed black men were killed or abused by the NYPD. Life is funny, the first time I remember marching for a cause was when I was a child in Catholic school. I marched in a pro-life rally. The school organized our participation—I think our involvement was mandatory. These days I'm very much aligned with the Pro-Choice side.

Most memorable moment: During the walk from the stadium to the the rally sight, a crossing guard was giving marchers high fives as they crossed the street. One of the women from our crowd gave her a big hug. It was a real moment that captured the mood of the day. Some were moved to tears. Along the walk, so many of the charming homes that lined East Capitol Street had signs in their yards with quotes from Rev. Martin Luther King; many had made signs by hand in support of the march. Collectively they helped encourage and reinforce our sense of purpose.

What my next step is: I plan to work with BlueWave on local issues and to advance progressive candidates and issues, locally, statewide, and nationally.

Why I’m joining forces with BlueWaveNJ: I'm working with BlueWaveNJ because they work for positive change and progressive candidates. They are also active in the community, so it's not just talk—they are hands on. They truly believe "democracy is a contact sport." 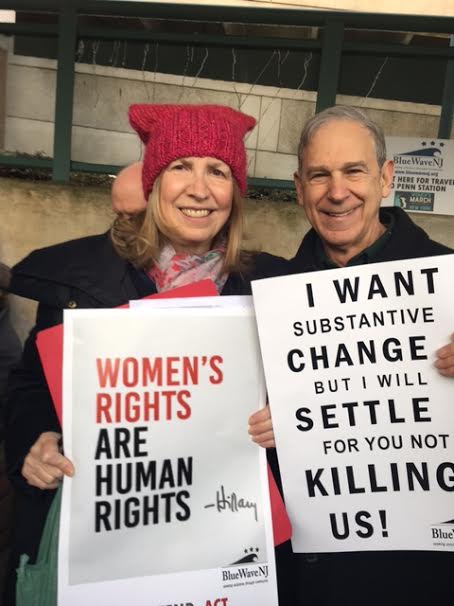 Wendy and Ken Schuman waiting for the train to NYC

Where I marched and with whom: My husband Ken and I went to the NYC Women's March with BlueWaveNJ on the train from Montclair. Blue Wave's great planning made everything easy, and we invited several friends who wanted in at the last minute.

Was this my first protest: I'm from the '60s, so this wasn't my first protest. I demonstrated against the Vietnam War and for women's rights. I remember taking our daughter in her stroller to an anti-nuke march in Central Park in the mid-'70s. In recent years I marched against the Iraq War. Now that I'm retired and a grandmother, I feel an urgent responsibility to make sure young people have a future.

What surprised me: I've never ever been surrounded by so many people in one place. It was incredible that in the middle of New York City, cheek by jowl with millions of people and often unable to move, there was no pushing, no impatience, only kindness, smiles, and positivity. It was heartwarming to see the diversity of ages, races, and gender.

What my next step is: I'm trying to spend less time on Facebook in a constant state of shock, grief, and anger. The awful news and assaults on democracy seem to arrive non-stop. It's overwhelming.

Why I’m joining forces with BlueWaveNJ: The election of Trump has changed everything. For the sake of our country and the world, we've all got to be activists now. Blue Wave has figured out how to organize and give focus to our efforts. I joined the health care working group--what a talented and committed group of people. We get weekly action steps so we can concentrate our efforts and not get distracted. I'm so grateful to the organizers of Blue Wave for their tireless and selfless work. 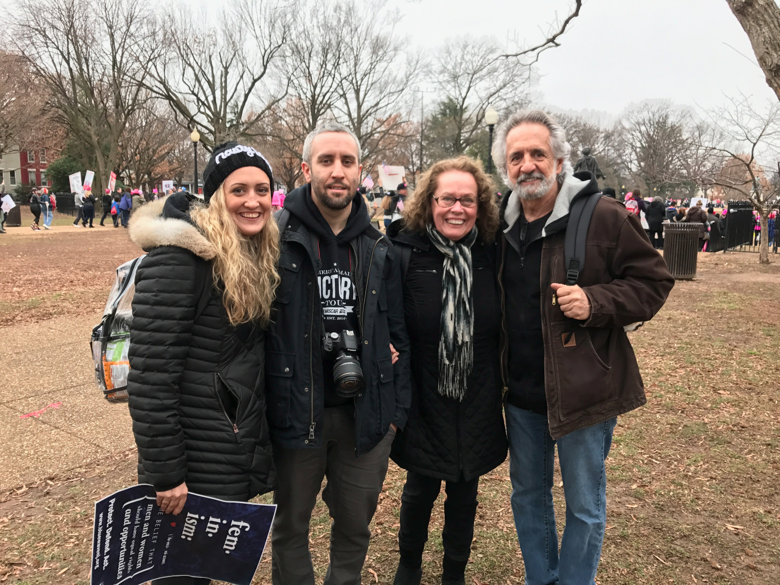 Where I marched and with whom: I marched with my mom, my dad and my brother Ian.

Was this my first protest? Yes!

What surprised me: When I spotted all those busses on the New Jersey Turnpike stretched as far as I could see, even before the sun rose, I knew the day was going to be different than I expected. I was also really surprised by all of the older women who came to the march—some with canes, some even in wheelchairs. Many talked about the fact that it wasn’t the first time they’d protested. I think there’s this feeling among women in my generation that marching won’t change anything, but that’s only because we haven’t seen it in our lifetime. The generations before us have seen the impact of their actions, that things can change. They brought home the troops from Vietnam. They won Civil Rights.

Most memorable moment: We were walking down Independence Avenue, and John Kerry came through the crowd, shaking people’s hands and saying “welcome to D.C.!” He shook my hand and I got to tell him “thank you.” I was glad to see that people like him were part of the movement.

What my next step is: I’m organizing a parents’ action committee for BWNJ. I want to make activism manageable and possible for time-crunched parents with young children.

Why I’m joining forces with BlueWaveNJ: I was directed to BWNJ because they were providing bus service to the D.C. march. I was amazed to learn that I had this powerful grassroots movement right in my home town. BWNJ made the day more meaningful for me and my family because they kept everyone so informed on all the issues and generated a real sense of excitement. 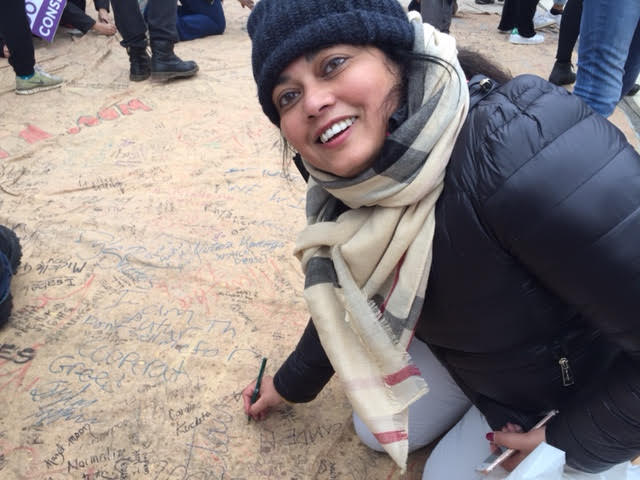 Anamika Sarkar signing the replica of the Constitution that was carried in the D.C. march

Where I marched and with whom: I marched in D.C. with Patricia Stafford, Claire Andrews, and Joanne Summer. We had never met before but were teamed up on the BlueWaveNJ bus.

Was this my first protest: Yes

What surprised me: I have very high regard for the values of America, the country of immigrants. That is why I decided to adopt this country as my home. I was demoralized by the election result and was feeling hopeless about my future here. I pledged to march three days after the election. At that time, all I knew was if I sit at home and complain, I am basically accepting what is wrong. After going to the march, I was humbled with the experience that the whole country can come together for the basic rights of human beings. It is sad that we even have to protest for basic rights! The support and the message from the whole world validated my thought that there are more people in this world who care about human causes. I felt much more hopeful, less lost after the march.

Most memorable moment: There were so many people in wheelchairs and strollers, and they were either old or children. These people inspired me to the core.

What my next step is: I am already involved in Organizing for Action for their health care activism. Now I will be involved at the community level via BlueWaveNJ. Also, I will participate in the scientists’ march on Washington when that happens.

Why I’m joining forces with BlueWaveNJ: During my trip to D.C., I was amazed by the dedication of the members of BlueWaveNJ. That is more than enough inspiration for me to join the force.