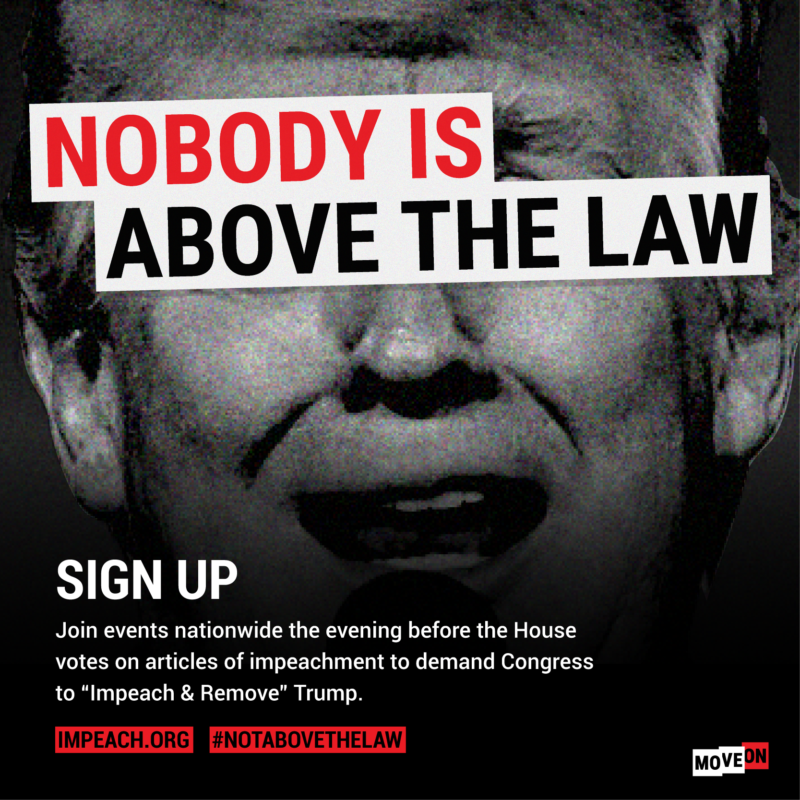 This Tuesday, Dec. 17, the evening before the House impeachment vote we will join rapid response “Nobody Is Above the Law” demonstrations across the country

Donald Trump used military aid to pressure Ukraine to interfere in our 2020 elections, before trying to cover it up.

Make sure you RSVP and then share the event with your friends and family.

It’s a fact that President Donald Trump used military aid to pressure Ukraine to interfere in our 2020 elections and then tried to cover it up. This is U.S. tax dollar funded bribery plain and simple. We are taking to the streets to say that nobody is above the law and therefore demand that Congress and the Senate impeach and remove Trump. These mobilizations are our opportunity to show that the people won’t stand for corrupt abuses of power.

By taking to the streets in cities across the county before the House votes to impeach Trump, we can set the tone that we expect accountability before the fight moves to the Senate.

Donald Trump must be impeached because nobody, not even the President, is above the law. That's why we are partnering with dozens of groups from the Women's March to NAACP to hold more than 400 events in all 50 states and Washington, D.C. to demand accountability. Throughout Donald Trump's criminal administration, we've been vigilant, refusing to let him abuse his power with impunity—from “Nobody Is Above the Law” events to defend the Mueller investigation to the movement to pressure Congress to launch an impeachment inquiry.

Now let's tell Congress to do their duty to impeach and remove Trump because nobody is above the law.