National Day of Action to Secure Our Vote

Join us for a rally to tell the U.S. Senate that we expect and need its action to protect our elections.

We have a chance to win $600 million to secure our elections by replacing election machines with paper ballots in the next Congressional appropriations, whose deadline is October 1.

The entire national security community agrees that election interference in 2016 was only a preview of what's to come unless Congress acts. Yet the Senate has failed to move forward with critical election security funding for states. Do you know what won't protect our elections from future meddling? Sitting on our hands.

The evidence is clear: In 2016, Russia targeted voting systems in all 50 states and used social media to spread disinformation and disunity among the electorate. In response, the House included $600 million for election security in their appropriations bill, which would allocate that money to states so that they can update electronic voting equipment with systems that use verifiable paper ballots. Paper ballots are the best protection against cyber attacks attempting to change the outcome of our elections.

Mitch McConnell must include 600 million dollars in the Senates appropriations bill.

Without a paper trail, our voting system is extremely vulnerable to hacking and foul play. In 2018, 14 states – including New Jersey – used voting equipment that had no way of verifying vote counts in the event of a cyber attack. 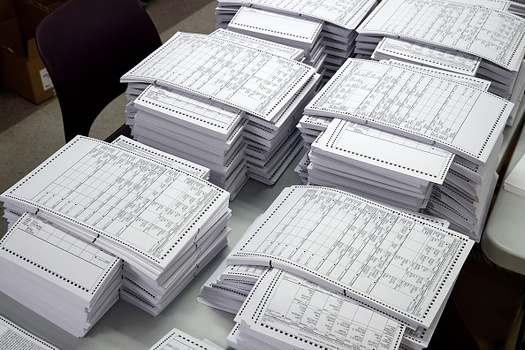 Stacks of paper ballots ahead of the 2016 election.

Mueller's report and recent testimony implored lawmakers to focus on election security, but finger wagging and hand-wringing will not prevent another attack on our democracy. What we need is common sense legislation that gives states the resources they need to secure our votes.

BlueWaveNJ is participating with a broad coalition of activists around the country, organized by Common Cause, Public Citizen and other public national public interest organizations.

Voting is the linchpin of our democracy and we can't affect change on the issues that matter to us, from gun control to health care, without securing the ballot box.

Representatives of the two Senators--not sure which yet.

Learn more on the national day of action here.