The legal end run to repeal (but not replace) the ACA

The subject of that letter was the Texas v. United States suit, filed by 20 Republican state attorneys general and governors, which renewed old legal claims from the “repeal Obamacare” crowd that were rejected by successive Supreme Court decisions.  The angle in the Texas case is that the Republican-dominated 115th Congress had somehow legally invalidated the whole of the ACA, with its thousands of provisions impacting every aspect of our country’s healthcare delivery system, when it pushed through the 2017 tax bill.  The claimants' current argument is that despite Congressional Republicans' failure to pass any bill to repeal the ACA's core programs, they effectively voided the whole law simply by zeroing the tax penalty for those who fail to obtain compliant health insurance.

Legal experts across the political spectrum have all but unanimously deemed the Texas plaintiffs' argument legal nonsense.  For example, an important proponent of prior court challenges to the ACA and a contributing editor to National Review Online, Professor Jonathan H. Adler, explained to Vox the logical fallacy of the contention that the ACA marketplace -- let alone its myriad other provisions -- can't function with a zeroed-out mandate.

Yes, Congress A [the Democratic 111th Congress in 2010] passed the mandate and the insurance reforms together.  But Congress B [the Republican 115th Congress] just repealed the mandate and kept the insurance rules.  Congress revises all its laws all the time, and the most recent revision is the proper way to understand how Congress intends the law to work …Because Congress A claimed this provision (as originally enacted) was an essential component to the broader scheme, plaintiffs claim this still applies to the subsequent revision (even though Congress B didn’t say so), and thereby want the whole statute to go down.  That’s just absurd.

Nonetheless, the G.O.P. plaintiffs prevailed in U.S. District Court by deploying the common practice of venue shopping -- filing their case in the Fort Worth Division of the Northern District of Texas, where Reed O’Connor, a George W. Bush appointee who is known to reliably rule against Obama-era federal policies, is the only judge who isn’t semiretired.  Predictably, O’Connor found for the Republican plaintiffs, then stayed his ruling was stayed while it went to appeal.  Which brings us to where we are today.

No one can say for sure whether the New Orleans-based Fifth Circuit, or the Supreme Court, with its newly strengthened right wing, will do the right thing, the legal thing, and completely reject this absurdity as the suit moves up the appellate chain. While Chief Justice Roberts has saved the ACA from two prior suits and would likely reject this one, it's possible that a liberal justice will die or retire before the case is decided, in which case all bets are off.

One thing we can say is that President Donald Trump, by doubling down on the idea of utterly destroying the Affordable Care Act, this time without any pretense that Republicans have a replacement to offer, has virtually assured us that health care will be THE issue of the 2020 national elections, as it was in the mid-terms.

This is actually a good thing politically for Democrats, who will get a chance to remind voters what the Trump/Republican law suit seeks to take away.  By virtue of the ACA, as the Kaiser Family Foundation recently reported, not only are about 14 million people receiving health coverage through the ACA-compliant individual marketplace, but 12.7 million more are covered strictly due to the expansion of Medicaid eligibility, 2.3 million young adults are now  covered under their parents’ insurance, and 52 million non-elderly adults with health pre-existing conditions that would likely have shut them out of the pre-ACA individual market can’t be denied coverage or charged more by insurers. Employer-sponsored insurance, which covers over 150 million Americans, has also been strengthened by the ACA, e.g., with mandatory free preventative services, including birth control and screenings for a range of diseases, and by a ban on yearly and lifetime caps on coverage.  The ACA has also mandated free preventive services for Medicare enrollees and closed the "donut hole" in Medicare Part D prescription drug coverage.

The fact is that Democrats as a whole, including virtually every presidential candidate, are aggressively asserting that health care is a human right, and are actively engaging in a spirited debate about the most effective way to get our country further along to the complete realization of that right, while Republicans, despite some constant obfuscation, have consistently viewed the demands of Americans for a government guarantee of affordable health care as another “entitlement” that has to be curbed or killed at all costs by those in power.

Let’s also note that to the extent that any Republicans in Congress truly disagree with Trump’s renewed press for “killing Obamacare” and want to, for example, protect Americans with pre-existing medical conditions, they will have an immediate chance to prove their sincerity by joining with Congressional Democrats to pass the “Protecting Pre-Existing Conditions and Making Health Care More Affordable Act of 2019” which was just introduced by New Jersey 6th District Congressman Frank Pallone, chair of the Energy and Commerce Committee.  This bill, dubbed “ACA 2.0” by health care policy wonks, would reduce premiums for comprehensive coverage at every income level, cap premiums in the ACA marketplace as a percentage of income, require the federal government to invest in enrollment assistance and advertising, and make other improvements to coverage under Obamacare.

Barr let’s himself be “overruled” by Trump

Getting back to the role of Attorney General Barr.  Both Politico and the New York Times have reported that Barr was among the cabinet and senior White House officials who quietly opposed the move to go further down this particular alley, before allowing himself to be “overruled” by Administration extremists, in this case Acting Chief of Staff Mick Mulvaney, the former drug industry lobbyist Joe Grogan, recently named as director of the Domestic Policy Council, and ultimately, by Trump.

As a sophisticated attorney, Barr of course understood the implausible nature of the Texas plaintiff’s claims, and he also knew of the long executive branch precedent, dating back from well before he served as the attorney general for George H.W. Bush, under which the Justice Department defends current law in almost all cases.  University of Michigan Law School Professor Nicholas Bagley points out that the DOJ’s duty to defend “is a close cousin to the president’s constitutional duty to enforce the law,” adding that without it, "the sitting administration could pick which laws it wanted to defend in the courts and which it wanted to abandon.  Laws could rise or fall based on nothing more than partisan disagreement.  That’s inconsistent with a constitutional system that assigns to Congress – not the president – the power to legislate.”  Yet Barr has stubbornly kept this knowledge to himself since the Administration’s March 25 policy shift.

So how does this square with the William Barr who appeared on camera in his January confirmation hearings?  Avuncular, already at the pinnacle of a long career in corporate law, Barr knew some of the right things to say.  He told the Senate Judiciary Committee that he was “in a position in life to provide the leadership necessary to protect the independence of “the Department of Justice. [Emphasis mine]  “I won’t be bullied into doing anything I think is wrong.”

Call me naïve, but Barr’s presentation at the time had me wanting to believe, despite what I already knew about him, that this was somehow possible.  That he could be that elusive white whale, the oft-promised, but never actually delivered “adult in the room” in the Trump Administration that some senior figures in the Republican Party have suggested.  (For the record, Health and Human Services Secretary Alex M. Azar II, and Pat Cipollone, the White House Counsel, were two others who reportedly also expressed concern with the “destroy ACA in through the courts” move, but similarly lacked the backbone to do anything.)  I guess I was wistfully hoping we could somehow go back to the pre-Fox News days of reduced partisanship on some essential things, like when I was still a young kid, and your next door neighbor’s father wearing an “I Like Ike” button didn’t matter so much, even if your family voted Democrat.  How did we get to this point?  But alas, Barr is not that much of an adult.

When I look back at the confirmation hearings now, what strikes me most is the irony in Barr’s tangential critical reference to his predecessor, Jeff Session.  When asked about Session’s commitment to follow the recommendations of the DOJ’s professional ethics staff when it came to recusing himself from the Russia probe - arguably the single act that Sessions got right during his tenure - Barr referred to that as Sessions’ “abdication of his own responsibility”.  Abdication of responsibility is a very good description for what we see from Barr at this point.

The abdication of these supposed ‘adults’ keeps getting worse, it seems, during the second portion of Trump’s term.  And now the latest abdication, in one blow, clearly hits both the nation’s health care and the rule of law.    William Barr’s June 2018 memo to the DOJ concerning the Mueller investigation rightly provoked the wariness of democracy minded people, in particular, his argument there for an expansive view of presidential authority.  The President "is the sole repository of all Executive powers,” wrote Barr, “…the full measure of law enforcement authority is placed in the President’s hands, and no limit is placed on these kinds of cases subject to his control and supervision.”

Recalling also Barr’s less-than-savory role in securing pardons for former Defense Secretary Casper Weinberger and five others accused of wrong-down in the Iran-Contra scandal of the 1980s, when he previously served as attorney general, we are entitled to ask whether Barr’s expressed subservience to presidential power is more than just a slightly odd legal theory, but perhaps complex jargon for “I’ll go along with the boys.” In the worst case, and being fully mindful about the very dark path that the Donald Trump administration is trying to take our nation down, it might very well be considered the current day equivalent for the  “I was only following orders” defense.

William Barr has not earned our trust.  His ability to cite precedents and spin constitutional theory should not put us off, as he continues in the role of making additional consequential decisions, such as over access to the Mueller report.  The rule of law has to be about democracy in our country if it means anything at all.  Going silent on Trump’s legal end run to destroy our health care rights is the opposite of democracy, the opposite of the rule of law. 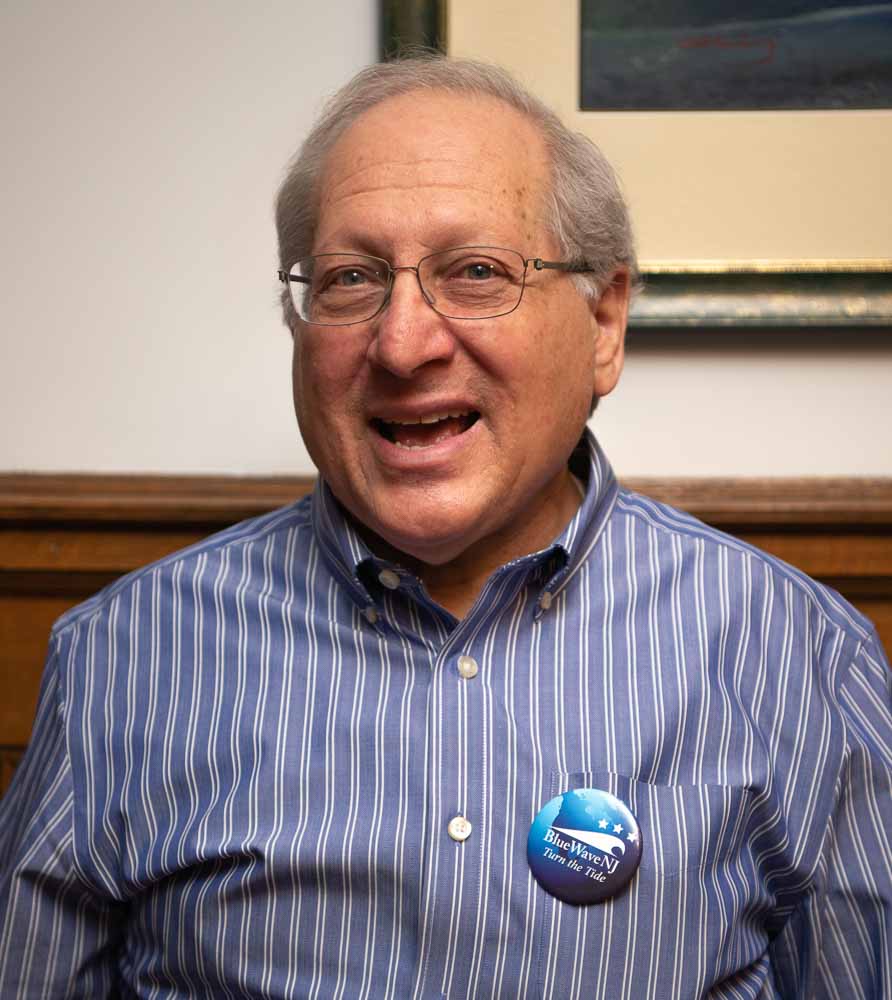 Mark Lurinsky has been an activist on matters of public policy since 1968.  He is currently a member of BlueWaveNJ’s Electoral Reform Working Group and is co-chair of the Healthcare Committee.

Under the blog title Small “d” democracy, Mark will continue to weigh in on the current issues that define how our country can become a more just, equal and democratic society.