Trump's "health care plan," unveiled on September 24, is such a pathetically transparent fraud that it's gone down without a murmur. Embodied in an executive order and an orally delivered promise, it boils down to:

Mid-pandemic, this "plan" is the healthcare equivalent of tossing paper towel rolls to Puerto Ricans rendered homeless by Hurricane Maria.

This passel of signature Trump fraudulence aside, what is the healthcare policy of the Trump administration -- and de facto, of the whole Republican Party?

The centerpiece is inescapable: judicial erasure of the Affordable Care Act. With the death of Ruth Bader Ginsburg, Republicans' transparently fraudulent attempt to have courts declare the ACA unconstitutional, already affirmed by right-wing extremist judges in federal district court and the Fifth Circuit Court of Appeals, has a real chance in the Supreme Court. The Court may uphold the ACA or inflict damage on its programs short of full repeal, but full nullification is no longer unthinkable. 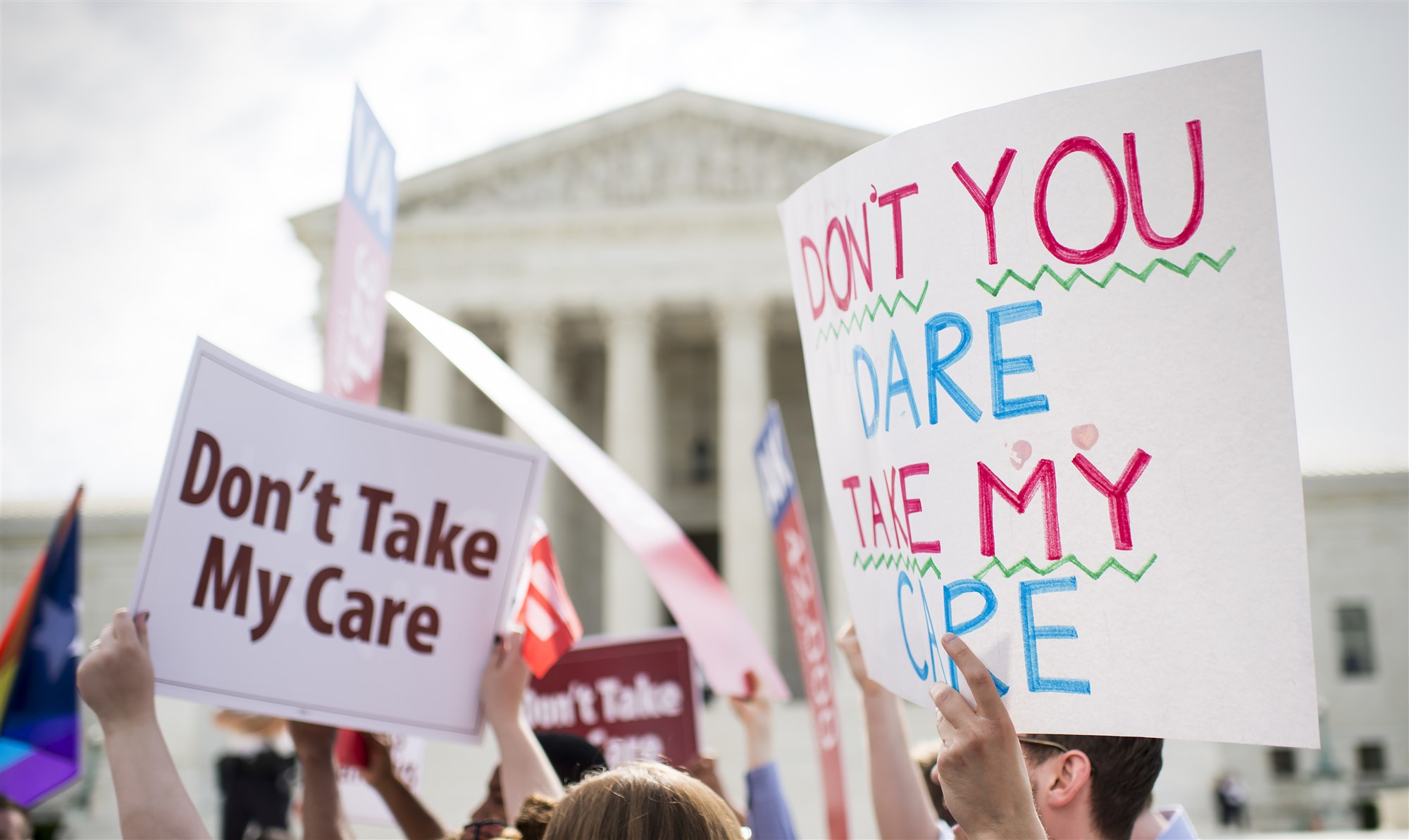 The ridiculous premise in Texas v. California, the suit filed by 18 Republican attorneys general and governors seeking to void the ACA, is based on the Supreme Court’s 2012 ruling that the ACA’s “individual mandate” to purchase insurance exceeded Congress’s powers under the commerce clause -- but is constitutional as an exercise of Congress’s taxing power. In 2017 the Republican Congress zeroed out the penalty for going uninsured but left a zero-penalty mandate in place. The Texas plaintiffs claim that with no penalty, the mandate is no longer a "tax" and is therefore unconstitutional. In effect, they, argue, Republican Congress rendered the ACA unconstitutional by accident.

The Trump administration has argued that the mandate is inseverable from the rest of the ACA, so the entire law must be struck down. Never mind that the zeroing out of the penalty as of 2019 has had little impact on ACA marketplace enrollment, which the mandate was designed to bolster.

What would ACA repeal entail? The short answer is taking comprehensive health insurance away from over 20 million people. That includes most of about 15 million Medicaid enrollees who fit the ACA’s expansion enrollment criteria, 9 million people whose premiums are subsidized in the ACA private-plan marketplace, and 2 million adults under age 26 whom the ACA enabled to be insured through their parents' plans.

As in 2018, Republicans solemnly swear that they'll preserve "protections for people with pre-existing conditions." They won't (their failed 2017 ACA repeal bills didn't), but this fight is not primarily about the regulation of health insurance. It's about money. In 2019, the ACA generated $66 billion in federal funding of the Medicaid expansion, and another $62 billion in ACA marketplace subsidies and other support. Most of the people who receive benefit from either program -- Medicaid expansion or the subsidized ACA marketplace --  would become uninsured if they lost that support.

The pre-existing condition that matters most is low income, coupled with the uniquely high cost of U.S. healthcare. Republicans strive relentlessly to defund programs that insure Americans who lack access to employer-sponsored insurance. 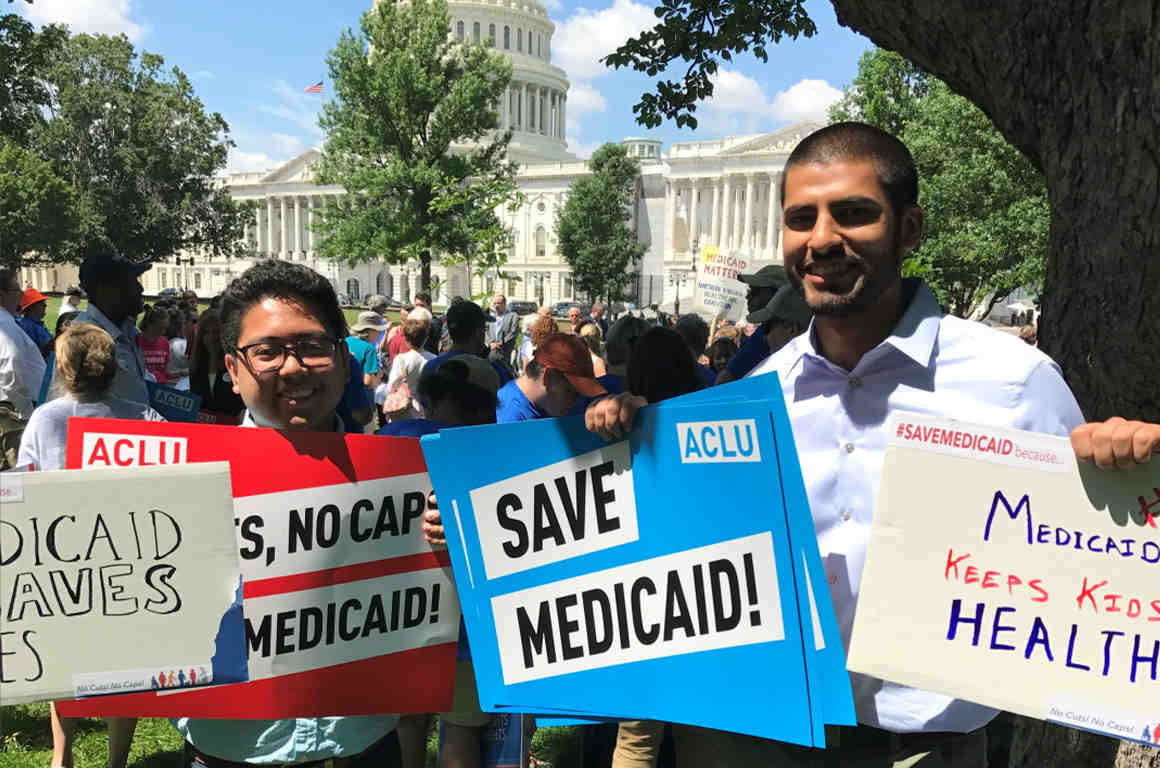 The ACA's protections for people with pre-existing conditions focus mainly on the individual market for health insurance, which insures about 4% of the population at any given time. Those protections are indeed important. While working-age Americans depend primarily on their employers for health insurance, anyone below Medicare age can be thrown into the individual market at any time if they lose a job. About half the population has pre-existing conditions that could affect their ability to buy insurance in the pre-ACA individual market. Guaranteed equal access to comprehensive insurance, regardless of current health or health history, is an essential benefit for all of us.

But Medicaid matters more than the marketplace. In 35 states that have enacted the ACA Medicaid expansion (which the Supreme Court made optional for states in 2012), Medicaid enrollees who fit the ACA’s expansion enrollment criteria outnumber marketplace enrollees by a 3-to-1 margin—15.3 million versus 5.2 million.  Since February, the last month in which the economy was unaffected by the Covid-19 pandemic, Medicaid enrollment has further increased by about 6 million, while marketplace enrollment has increased by less than a million.

Republican intentions to cut Medicaid extend far beyond even the massive cut entailed by repealing the ACA Medicaid expansion. In 2017, Republican bills to "repeal and replace" the ACA that passed the House and nearly passed the Senate imposed "per capita caps" on federal Medicaid spending or converted that spending to a block grant basis. That’s a recipe for eviscerating spending over time.

The Congressional Budget Office estimated that the Senate repeal bill would cut Medicaid spending by 35% over 20 years -- a $2.1 trillion dollar cut by one estimate.  The Trump administration has similar intentions for Medicaid, signaled by its invitation to states to sabotage their own Medicaid programs by requesting waivers for block-granting.

Block grants or per capita caps would slow-strangle Medicaid's cost-effective coverage for those who remain eligible after ACA repeal -- including almost 40% of the nation's children, the blind and disabled, low income seniors and those requiring long-term care, and pregnant women.

Unrestrained by Democratic control of at least one house of Congress, Trump -- and the Republican Party at large – are also likely to destroy Medicare, rendering coverage progressively more limited and unaffordable. They would do this primarily by obliterating Medicare's pricing power. Medicare pays hospitals less than half as much as commercial insurers do on average and pays doctors about three quarters as much.

The order directs HHS to use Medicare Advantage rates as a benchmark for traditional Medicare rather than vice versa, nullifying the government's rate-setting prerogative. Prices paid might then rise to the levels paid by commercial insurers in plans sponsored by employers. The federal government would likely then seek to cap its share of accelerating Medicare costs, shifting an ever-larger share of costs to seniors -- as in former House Speaker Paul Ryan’s annual proposals to turn Medicare into a voucher program.

That's Trump (and the entire Republican Party) for you: inject “competition” into a market by inducing the lower payers to pay rates comparable to those paid by the highest payers -- then shift the added cost to consumers. Fortunately, that executive order was just flimflam too.

Medicaid. Medicare. The ACA marketplace. Trump's healthcare plan is to eviscerate or eradicate all three, uninsuring tens of millions, underinsuring tens of millions more, and eliminating the cost controls that our public health insurance programs impose on a healthcare system already corrupted by rampant revenue-centric incentives. Under continued Trump leadership, U.S. healthcare would fare no better than U.S. democracy.

Andrew Sprung, co-chair of BlueWaveNJ's healthcare committee, writes about healthcare policy on his blog, xpostfactoid, and at healthinsurance.org