BlueWaveNJ went to Washington D.C. on Jan. 29 to meet with the members of the New Jersey Congressional delegation to discuss our national agenda as well as listen to their priorities. In addition to the members of our health care, environment, economic security and election reform committees, we also had a number of young people on the bus concerned about college affordability and the staggering level of student debt they and their friends have accumulated.

In each of our meetings, we gave the representative and staff a list of BlueWaveNJ’s 2019 national priorities and thanked for their support of progressive legislation. In particular, we thanked our entire house delegation for co-sponsoring the symbolic, but extremely important, For the People Act (H.R. 1) which tackles money in politics, ethics, voting rights and non-partisan redistricting, and for co-sponsoring the Bipartisan Background Check bill (H.R. 8), as well as their multiple actions to force a reopening of our federal agencies after President Trump’s unprecedented 35-day shutdown. During an extremely busy day, we met with 11 NJ members and their staff, including our two senators and 9 members of the House of Representatives.

One of the takeaways from the visit is how fortunate we are to have such a large number of thoughtful, knowledgeable and progressive Democrats. We were impressed with the quality of leadership as well as their willingness to meet and exchange ideas. Despite limited time, we were able to have a number of substantive conversations on the issues.

The People's State Of The State

Before Governor Murphy gave his State of the State address to outline his priorities for the coming year, we rallied in Trenton to announce and support all of the progressive policies that we will be fighting for over the coming year. There is a lot to do in the coming year and we will continue demanding action from the Governor and Legislature 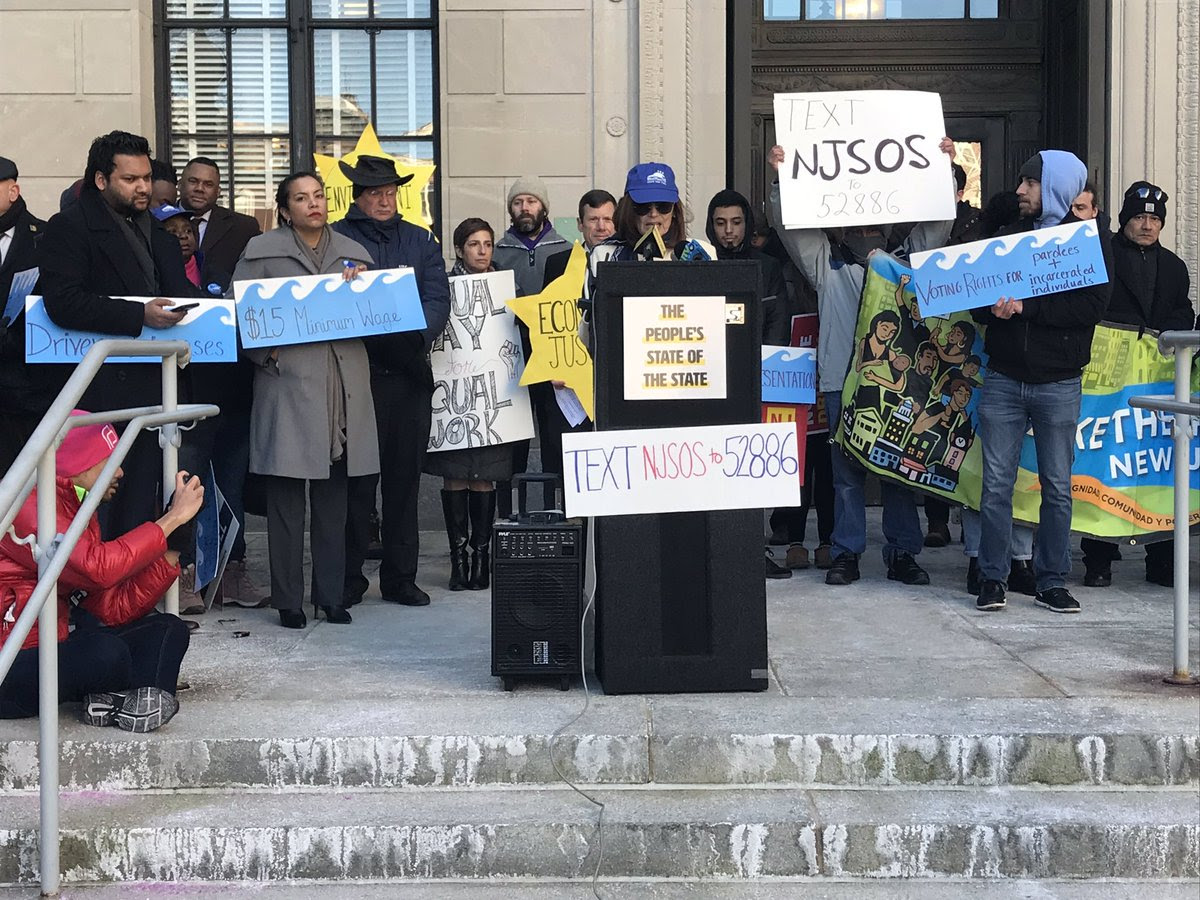 BlueWaveNJ has been pushing for a $15 minimum wage for many years now. This past month we testified to the state legislature, lobbied our representatives, and worked closely with the Governor to finally get this important issue passed. We are very pleased to announce that a deal was reached and on February 4th the Governor signed the bill which will raise New Jersey's minimum wage to $15 an hour. While the bill is not perfect, Monday represented a significant victory for New Jersey families, raising wages for an estimated one million workers.

Perhaps you wouldn’t know it with all the turmoil surrounding Donald Trump’s government shutdown, but congressional Democrats are quietly going on the offensive to strengthen our democracy.

On the third day of the new Congress, Representative John Sarbanes of Maryland and Speaker Pelosi introduced H.R.1, the “For the People Act of 2019”, “to expand Americans' access to the ballot box, reduce the influence of big money in politics, and strengthen ethics rules for public servants, and for other purposes.”

Our Electoral Reform Group is currently working to ensure New Jersey's next voting system is, safe, secure and will have a paper trail at long last. Our agenda also includes the Disclosure Bill S1500/A1524 which should be up for a floor vote in the Senate soon. Our third most pressing issue is to promote the federal For the People Act HR1. This bill will introduce many necessary and long overdue reforms to our electoral process. Read our article on HR 1 here.

BlueWaveNJ is part of Empower NJ, a growing coalition of more than 50 environmental and grassroots groups, formed to advocate for an immediate moratorium on all new fossil fuel projects. With these organizations we are working towards a sustainable energy future for New Jersey. Action must be taken now for the future of our planet.

Empower NJ: No Fossil Fuel Projects campaign, calculates the previously overlooked cumulative greenhouse gas emissions (GHG) from the 13 projects outlined (see Appendices I and II for details of each project) would increase New Jersey’s total GHG emissions by approximately 30% and the 5 power plants would spike GHG emissions from electricity generation by roughly 76%.

Please save the date for the 2019 BlueWaveNJ Gala which will take place on April 5th 2019 at Mayfair Farms in West Orange New Jersey.

To find out more information about BlueWaveNJ go to: